We have developed a tradition over the last several years with Izze natural soda. On special days we drink a bottle of Izze to mark the occasion. I was first attracted to Izze when a was faithfully avoiding all refined sugar. Izze is fruit juice and sparkling water, no added sugar. Today we each enjoyed a bottle of Izze Sparkling Clementine to celebrate Waffle’s 1st birthday. We got to see her and Claraliz on Saturday but we wanted to do something extra today to mark her birthday. I love Izze’s fruit flavors and I enjoy their colorful bottles and I save the bottle caps with their fun design. 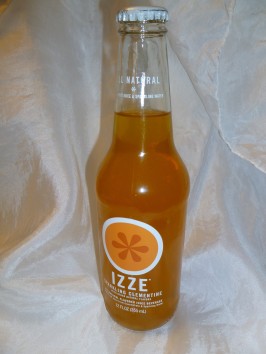 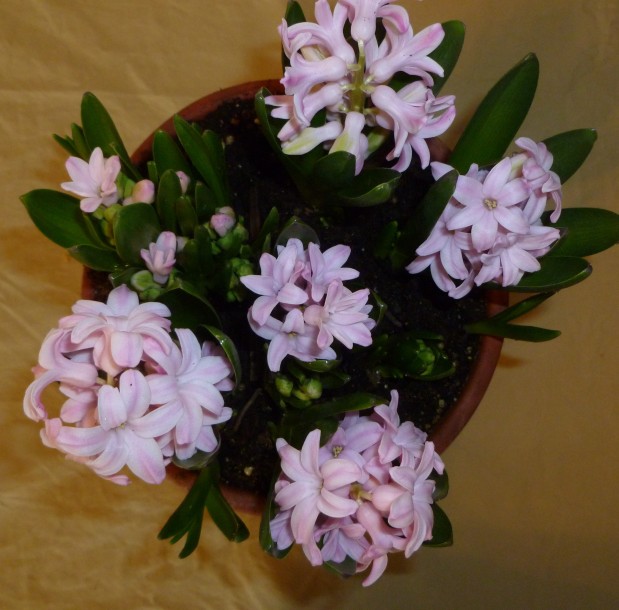 My Pot of Hyacinths

This project actually started last year when I helped clean out the flower beds of their spring bulbs at the Jordan River Temple. Instead of planting the few hyacinth bulbs in my yard, I put them in a beautiful periwinkle pot that my sister gave me many years ago. I kept the pot in the garage until the first week of February. When I brought it inside it didn’t take long  for the first shoots of green to start coming up. It has been so much fun to watch them grow. One bulb was really slow coming up and I gave up on it but even it came up eventually. Then the first of the pink blossoms started to show. I have so enjoyed having a fresh breath of spring at the end of winter. Now I want to force bulbs every year and maybe even find more pots so I can do extra to share with others too.

Today we got to visit Waffle and Claraliz. On Monday Waffle will be a year old and I really wanted to see our little girl. We hadn’t seen Waffle since she transferred  to Claraliz the end of September. We didn’t want to do anything that would disrupt her training but I checked with our club leader and she said it would be fine. So we made arrangements to meet up with Waffle and Claraliz at her house. It was so fun to see our little Waffletta. She jumped on me after I got in the front door. I was glad that she was happy to see me. Sometimes when we were raising her it seemed that she was always happy to see everyone else but since I was there most of the time she didn’t seem to miss me.

Yakira and Waffle got to play together and I made Waffle a tug rope that she really seemed to like. We also had a zip lock bag full of adult food left over from Casey that we passed on to Waffle. Yakira is still many months away from switching to the adult food. It will be kind of old by then. Claraliz made some yummy red cake for us and we got to meet her pet dogs and her dad and a brother. Waffle is doing really well. She is very grown-up and her nose is very pink. Waffle also still has her underbite. Didn’t really think that was going away. She is very happy and content in her new household. She has now been with Claraliz as long as she lived with us.

We probably won’t get to see her again until recall day when she gets on the truck to return to Guide Dogs for the Blind. Claraliz is thinking about getting a new puppy this summer to raise. I hope she does. She is doing a good job with Waffle.

Today we went to the Gateway in downtown Salt Lake City. They was a party for the 10th anniversary of the 2002 Winter Olympics. We didn’t go to any sporting events 10 years ago but we say the torch as it passed a couple of blocks from our home in Provo and we made the trek up to see the Olympic cauldron after it was lit. We also enjoyed the ice sculpture contest and the Dale Chihuly exhibit. We (Bill, Yakira & I) rode Trax in and walked around to see what was going on at the Gateway and took some photos. Then we wandered around the Clark Planetarium and finally had lunch at Rumbi. After we got back to Sandy we stopped at Costco to get some groceries. It was a fun and relaxing kind of day though all three of us where very tired by the time we got home, including Yakira. She was a very good pup and handled all the people and situations with ease.

Yakira in a Valentine's Day scarf

Yakira turns 6 months old the day after tomorrow and since today is Valentines day I put a cozy pinkish scarf around her neck. She looks so cute in it. Well that is probably because she is cute. She doesn’t need a scarf or any other adornment, she is cute all by herself. It bugged her having it on for a couple of minutes and then she forgot all about it. We have had our little girl for 4 months now and boy has she made huge progress and grow so much. I’m proud of our precious pup. Yakira loves heat and one of her favorite spots is in front of Bill radiant space heater. She just lays there basking in the heat. 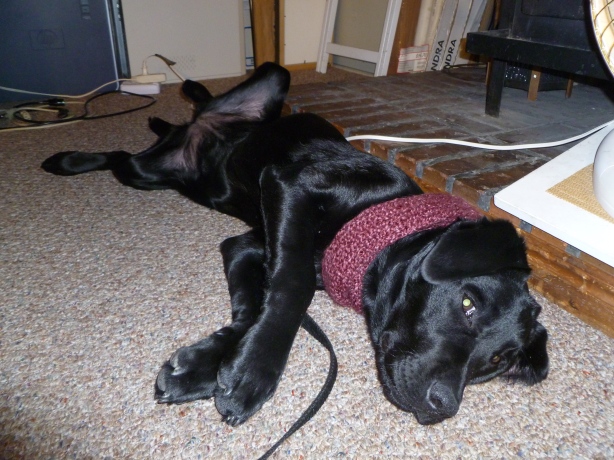 Yakira laying in front of the space heater 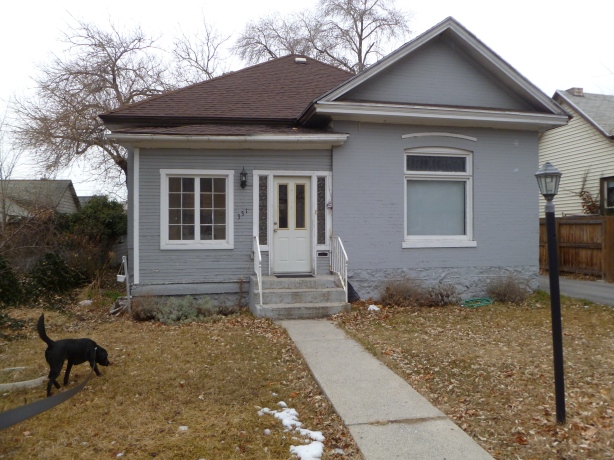 One of the working dogs I walked for Ski for Light

I forgot that I had walking dogs for Ski for Light on my list of 50 for 50, so I actually got two things done this week. I’m sure being ahead will come in handy in the next few weeks. When ever Ski for Light comes to Utah I jump at the chance to walk the guide dogs while their handlers go cross country skiing at Soldier Hollow. When I’m there I can’t help but remember the first time I helped. It opened my mind so much to what working guide dogs were really like. We were raising our first puppy, Apex, at the time and I had it in my head that Apex need perfect behavior in every to make it as a guide dog. Then I saw that these dogs weren’t perfect in every way. Many of them went after stuff on the ground just like Apex did when we were on walks. It was one of those Ah ha moments.

We were short-handed two of the three days that I walked dogs. The last day we were really short and my friend Tricia got to walk a Golden Retriever to help get the dogs done. That day Jeanne gave me several dogs that needed long walks so I really got my exercise in.

On Friday Karen, another puppy raiser, and I took our puppies in training (Osaka and Yakira) down to Provo to meet two of the women we know from GDB Lounge (a yahoo group). They really enjoyed meeting the puppies but their guide dogs weren’t so sure about two energetic and forward little puppies. It was a very fun but tiring week.

While I was in Provo this week I thought it would be a goo time to go by all the places I lived during my many years there. Besides the years I went to school at BYU, there were also the years while Bill went to BYU plus we lived there for several more years after he graduated. I was able to remember where all of them were except one. It was one that had been torn down. There were two corners that were possibles so I had to look up the address and then go back again.
Of the ten places I lived in Provo, three of them have been torn down. One, “The Red Uglies” was torn down while I still lived in the area. I took a bunch of pictures of it at the time. It was kind of a special place because my mom had lived there too, when she was going to BYU. Another place “The Brick Oven”, an old apartment building, was the second place we lived after we got married. One of our neighbors was Tag Romney and his wife. They lived there because his parents had lived there when Tag was born. Funny that his dad, Mitt is now running for President of the United States. It is kind of a small world. 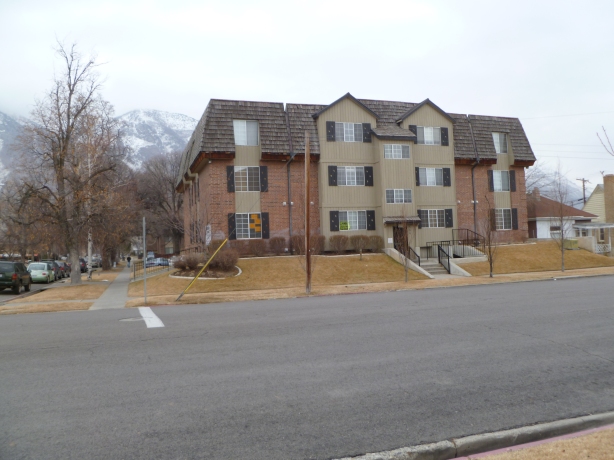 50 East 900 North - this is the first place we lived after Bill and I got married.
We entered in through what was the garage then most of the apartment was in the basement.

210 South 600 West - This is the first home we bought.
It was built in 1864 for the youngest wife of a Squire Whipple who was in the same pioneer company as Brigham Young.

I remember the song “Sugar, Sugar” (1969 – Archies) from when we lived in Ogden. The main memory that comes to mind is the record of the song that came on the back of a cereal box. This was the only record we got this way and I all the other records in the house were my parents, not us kid’s. Well we played it over and over so much that my mom helped the record into the garbage can. The other memory is having the radio on and some one saying something about sugar, sugar and then the song “Sugar, Sugar” came on the radio. My memory says it was the first time I had heard the song and I thought it was so funny to say the words and then have a song with those words come on the radio.
So to celebrate my 50th year I got on the internet on Monday and found a recording of the song “Sugar, Sugar” and listened to it a few times. The really cool thing is that on Friday I was eating lunch in Hagerman’s Bakehouse Cafe in downtown Salt Lake when what to my surprise “Sugar, Sugar” comes on over the speaker system. I don’t know when the last time I heard it on the radio but it was a sweet little serendipity for my 50 for 50.