“The Knight Before Christmas” (north side)

I don’t think I’ve posted much about this year’s candy window display for South Jordan. Well, now that it is done, I realized I’d better post something. Our theme was Star Wars inspired, “Feel the Force of Christmas” or something along those lines. My neighbor, Andrea (who was wonderful to work with) and I partnered up this year to do the window. She was a lifesaver last year when I broke my hand and she enjoyed it so much that she wanted to help this year, from the beginning. Her daughter Nicole came up with our idea (Yoda reading a book to three Ewoks) and then we went to work. Besides my husband, Bill (who gives more and physical support as needed), another neighbor, Cherri helped (with Yoda’s skin) and Bryce (Bill’s co-worker) built Yoda’s chair. After too many hours of shaping, painting and gluing we finished up last Friday afternoon with several hours to spare before the official “Light the Night” opening at South Jordan City Hall. If you are in the Salt Lake City, Utah area this holiday season stopped by Town Center Drive in South Jordan and see our creation. Plus you can see last years Ferris wheel just south of City Hall in the South Jordan Library.

view from the west side

close up of Wicket 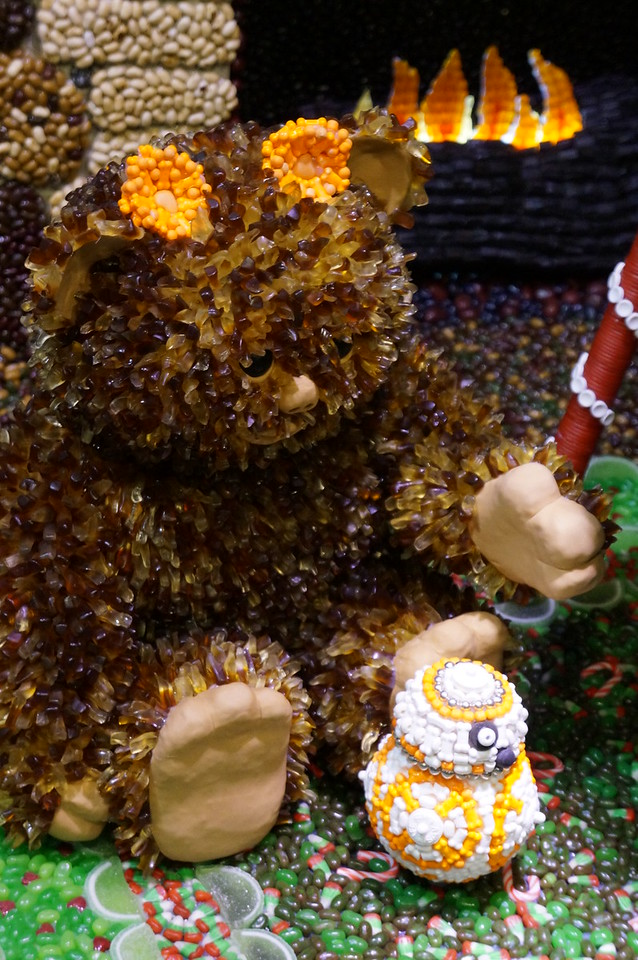 Yoda and the fireplace

Bill with an assemble seat for the Ferris wheel

We made some good progress on the window last week, especially on Saturday. I got the cars cut out with a band saw on Tuesday and picked up Styrofoam scraps for all the figures. On Wednesday only one girl showed up form the youth council, so we worked on the trees. I was hoping to do some more prep for the cars but ran into a snag. Four youth came on Saturday and they continued worked on the trees. We now have two trees done and two more assembled and one of those with some candy on it. Just one last tree to assemble.

Bill worked hard all day and got all six cars for the Ferris wheel assembled! He needed my help from time to time to hold a part in place while he drilled holes or inserted screws. Bill also figured out how to get the threads cut in some of the metal rods. The first set of thread cutters where too cheap and that was the problem. With a quality die, it was simple to cut the threads. It felt good to make such progress. So much ahead and more hurdles to jump.

Today I picked up some green paint for the cars and green pull ‘n’ peel licorice. I thought I’d need to order the licorice but it turns out that Walmart had the best price for it so I picked up a dozen packages. We may need more. I’ll know better after we get one car covered. Now that they cars are built I can start working on all the figures. There are a bunch of them and that isn’t something that I can ask the kids to do. They can help cover them with candy once they are shaped but I’ve got to do the shaping for two reasons. Because I have the experience and so that all of them have a consistent look and feel. For me that is the next big hurdle. For Bill it is cutting the metal for the big Ferris wheel and getting it all welded together.

Snoopy and his doghouse

Finally coming up for air after a couple of weeks of total focus on finishing this years candy window. Last night was the unveiling and though we had some snags and challenges along the way Snoopy and his dog house look great. If you are in the Salt Lake Valley during the holidays let me know and I’ll give you directions to find the window. There are 8 other candy windows too, including my Frosty from last year. I only got a couple of pictures snapped. Hopefully I can get some more next week of Snoopy and the other candy windows too.

Christmas from A to Z at Festival of Trees

Part of what made this week extra crazy is that we donated the candy sculpture (Christmas from A to Z) I did two years ago to the Festival of Trees. It was in pretty bad shape and I spent 12 hours fixing it up. Good news is there were multiple bidders and it sold for about $650. All that money goes to Primary Children’s Hospital.

wreath for over the door of Snoopy’s doghouse

I couldn’t bring myself to brave the cold garage and work on Snoopy today so I decided to do the wreath that goes over the door of Snoopy’s doghouse. Small parts like this are kind of fun because I can get them done in a day. Yeah for feeling like I got something done. This was also fun because it is the first piece of the window with lights in it. I love lights glowing through candy. To me it has such a Christmasy feeling.

wreath with lights on

I finally got some photos of the doghouse added to the post from a couple of weeks ago. Raspberry Pi Board from Wikimedia Commons

Today I thought I’d update on what Bill is doing for the window this year. The core piece is a Raspberry Pi board like in the photo above. What does a computer board have to do with a candy window display for Christmas? I’ll try to explain. There are three sets of Christmas lights in the design: one on the Christmas tree, one on the wreath over the doghouse door and two strings of the large lights that drape over the roof of the doghouse. The plan is to use the Raspberry Pi board along with some other hardware to control how the lights go on and off. We are keeping it pretty simple this year to test things out but hope to do more complicated things with lights in future years.

We are playing around with having the lights synced to music from “A Charlie Brown Christmas“. This is new territory for us but I’m excited at the possibilities. In the worst case scenario we can have the board turn the lights on in the evening and off at midnight or so. Hopefully we will get succeed in doing lots more than that.

As far as candy gluing goes I’m now behind the schedule I made for my self for getting my this years candy window done. Yakira’s career change has distracted me. The plans for getting her to Florida are mostly in place so I’ve got to get back on track.

Still plugging away on Snoopy‘s doghouse. I’m getting close though. I didn’t get any work done on it last Saturday so the roof didn’t get finished until this week. The last step is the trim which consists of around the door, the eaves and the edges of the roof (can’t think of what that is called, or maybe those are the eaves and the other is the soffit). Anyway, I digress. Around the door is done, both gable ends are done. I have a little piecing to do on the soffit on one end and about 2/3 of the edge of the roof on one side.

I’m excited to be almost done with the doghouse. That is a big chunk of the window.

my work space in the corner of the garage

This week the candy gluing started in earnest. I prefer to do the parts that I use silicone caulk as the adhesive out in the garage. That way the house doesn’t get stunk up and I don’t have to worry so much about having adequate ventilation. But first I needed to make a space in the corner of the garage for me to work. It is amazing how much stuff accumulates in the garage over the course of a year. I’m really happy with how I was able to fit an old table into the corner. It has created a great workspace.

Since then I’ve been gluing red Aussie style licorice to Snoopy’s doghouse all week. I’m just about done with the walls. I should be able to finish them tomorrow. Then the roof covered with cinnamon bears is next on the list. Last step of the doghouse is the trim. I’ll work on that next week. Which should keep me on schedule.

Snoopy and his doghouse

Here is a photo of the window as it looked late last week. Bill helped me get the support structure for the tree finished. Yeah! This week, I got some work done on the red star and I got the lights put on the tree. The tree still needs to be painted green. Today I picked up 7 cases of candy from World Foods. I should have most of the candy I need for the window now except the sky which I’ll be order in the next week or so.

I haven’t gotten as much done this week as I’d hope. I’ve been fighting a cold and I finally feel like I’m winning the battle after a week. Hopefully Saturday will be a good day to get lots of candy attached.

I’m almost ready to start gluing on the candy. All the structure is shaped and most of it is painted. I still need to paint the inside of the doghouse black. The biggest thing I have left to do on this stage is the tree. While I have the tree shaped, I still need to build the support structure that will go through the roof of the doghouse to the ground. Then I need to put the lights on the tree and finally paint it. The only other pre-candy prep I need to do is to attach the string of big lights the will drape across the roof of the doghouse to some stiff wire so that it will look the way I want it to. I think I’ll use duct tape.

I’ve got the candy pretty much planned out but I’ll go over that in another post. (I’ll put up pictures as soon as I get some more taken.)

I finally got the base of the shadow box that is being built to hold my candy sculpture. Even though I had done some shaping of the base there was lots more to do to make the whole thing work. It was nice outside on Saturday while I was working on it on our driveway. It looked like we had a snowstorm with all the little white bits of Styrofoam that collected around me.

It was exciting to put most of the pieces together and get a feel for how it was all coming together. I had some concerns that maybe Frosty wouldn’t fit in the window. But though it looks to be a bit tight in a couple of places I think we are going to be fine. I’m happy with how things are coming together and I feel like there is real hope I can get this done with out pulling some all nighters. Just 3 1/2 weeks to the unveiling!