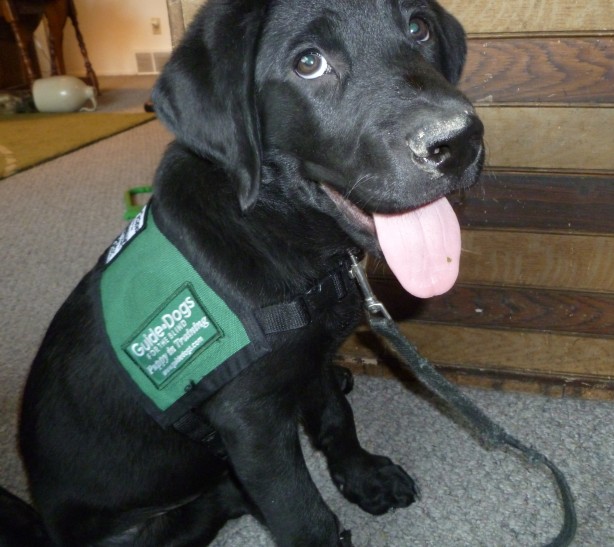 Zodiac in his new jacket

Zodiac got his official puppy in training jacket this week. It is a big milestone in a little puppies life. The important thing is to start socializing slowly and carefully, paying attention to how the young puppy is handling new situations and places.

Our first official outing was to the library to pick up some books and audios that I had on hold. With all the craziness around here lately I haven’t worked with Zodiac adjusting to his head collar like I should have. We started out with just his flat collar but he got way too excited before we even got up the library steps. So we stopped and worked on putting on his Gentle Leader using food rewards to make it more positive. With that accomplished we made it up to the front door. Our library has automatic doors and Zodiac didn’t know what to make of those. He stood on the threshold for several moments, not sure he wanted to go in. Then he saw a woman inside. I explained to her that it was his very first outing. When Zodiac saw her he decided that going inside would be a good thing after all.

Things went much smoother after that. In some ways it is too bad that Yakira is still on “house arrest” (she has 7 more days) because she is in season. I’m sure that with Yakira along Zodiac would have waltzed right into the library without a second thought. At the same time it is good for him to do things on his own. Yakira won’t always be there.

Today Zodiac went with Bill to work, just for the morning. He did just fine, though he still needs some more work on adjusting to his head collar. We worked on it this week but that work isn’t done yet. By the way, doesn’t he look so cute in his jacket. I don’t think there is anything cuter that a young puppy in a training jacket. And when you see them walking through some public place it is the cutest thing. They are so tiny and so curious about the world. Plus there is a bounce to their step that is most adorable.