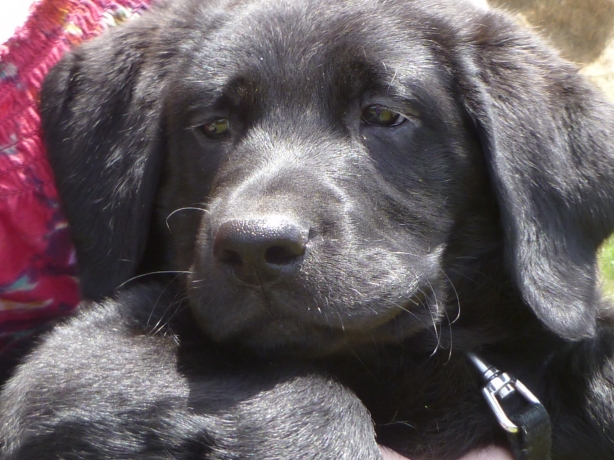 What a difference a week can make! Zodiac has made so much progress in the past week. The first few days were really rough, especially on the relieving.  But the first few days Zodiac peed and poop more in the house than he did outside. One thing he catch on to really fast was peeing in the kennel. He only did that once.Zodiac is now fairly reliable at relieving when you take him outside. He only has a problem when he doesn’t get taken out often enough or gets more freedom than he is ready for.

Zodiac in an x-pen

I like to use x-pens with puppies. They are bigger than kennel so pups are more likely to have accidents in them and we have carpet downstairs so we have a piece of plexiglass that we put under the x-pen to help with clean-up. I hate to haul kennels up and down the stairs so we use x-pens downstairs where I spend most of my time during the day. I like the x-pens too because it restricts their activity but given them a bit of freedom. I know they can’t get into anything and I can step out of the room for a minute and not worry. When they are older we use the x-pens restrict their access to a room or area of the house. I took Zodiac out before I started this post and he relieved perfectly. Now I want to give him some freedom but not too much so I’ve blocked off the area around my desk. He enjoys have more space and I know where he is. With each puppy we have found more ways to use the x-pens. I’d really like to find a couple more panels.

Actually relieving covers most the challenges were are having with Zodiac. Which is really good. He does struggle with whining and barking but as long as you don’t reward it that stuff takes care of its self. The first few days its was whining. Then when that didn’t get him what he wanted he tried barking. He started to bark saying, “hurry up with my food, I’m starving”. Each day it gets better so no real worries there. 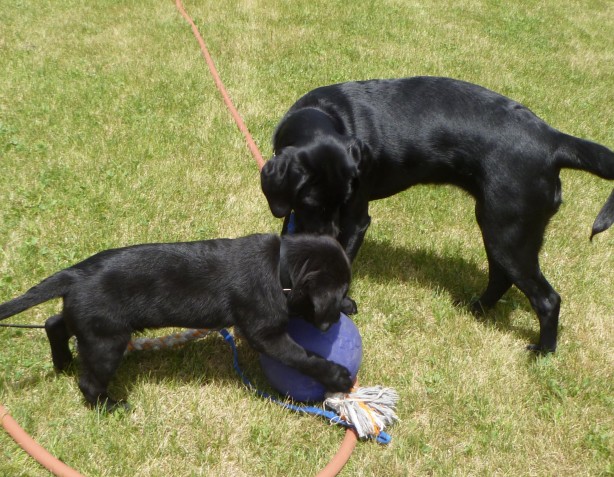 Zodiac and Yakira playing in the backyard

We are really pleased with Zodiac. I think that Yakira has been a good mentor and he is learning the rules quickly. He seems to have a good middle of the road temperament and his stubborn side has not been a problem. We are looking forward to raising him and seeing how he grows up. At this early stage it looks like he will be a great dog.