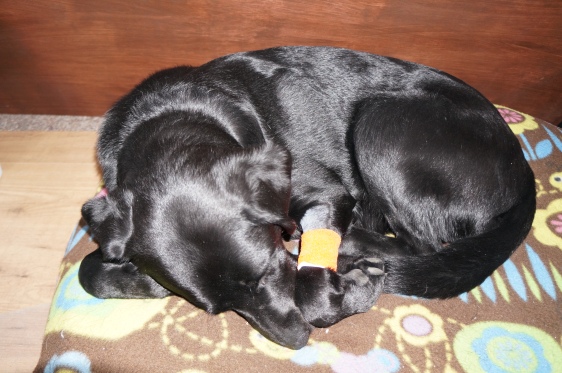 Fable after her surgery

We got the news a couple of weeks ago that Fable is no longer being considered for breeding. So Tuesday she had spay surgery. The vet said the surgery went well and Fable was a very good girl while they had her. She seemed a bit miffed at me when I picked her up. While she was perfectly willing to go with me, Fable didn’t acknowledge me until that evening. She was really tired Tuesday night and kind of nauseous. I didn’t clue into it until she threw up the dinner I encouraged her to eat. After Bill got home and spend some time cuddling with her she felt some better. But a good nights sleep did the trick and by the end of the day Wednesday she was feeling good and by Thursday night she thought she was ready to go at life full blast.

We have two extra dogs (a working guide, whose handler had foot surgery and a pet dog we are watching for family) now and Fable wants to play with them. She has spent the last two days at work with Bill, which limits the amount of time we have to keep her separated from the other three dogs. As long as she doesn’t overdo it for the next week and think things will be great. Fable has an official evaluation next weekend. I think she will do great, I sure hope so.

p.s. Galaxy is doing great. I’ll try to get an update written on her soon.