I hope that you have enjoyed this journey through Europe. I think I will miss these daily posts about my mother travels 60 years ago. For the next few weeks I’ll post on Tuesdays some of the “how to” of putting this book together. Today I’ll start with the cover.

I wanted this cover to look like a small suitcase that I remember growing up, that my mom used on this trip. It was brown with an alligator texture and it had stickers from different places in Europe all over it. I originally thought I’d take a picture of the suitcase. But getting access to it wasn’t very convenient and when I found that my mom had extra stickers from her trip I decided that replicating it would probably get better results. 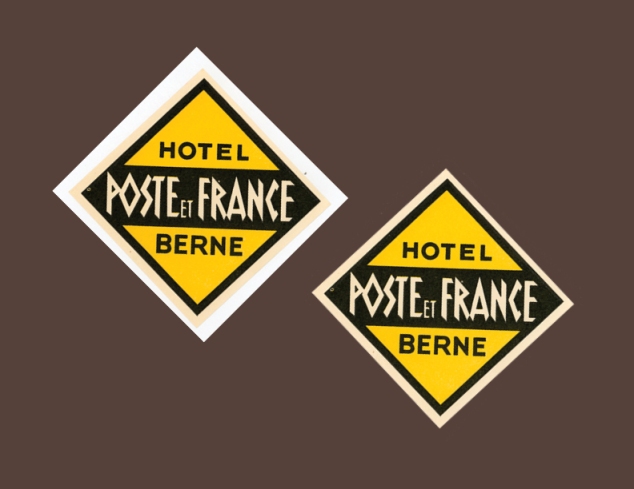 original scan on left – converted to png on right

The next step was to scan in all the stickers. Then I erased the background and converted them to png files so that the background was transparent. I did this in Photoshop.

Now with the parts and pieces I needed gathered together it was time to make the cover. I used blurb’s template for Adobe InDesign to get the size right for my book. They now have a handy plug-in for InDesign instead of template. It takes into account not only the size of the book and the number of pages but also the type of paper it is printed on. When making the cover it is just one page that includes the front, spine and back cover along with the bleeds for wrapping the cover. The template shows you were these things are on the page. I love the image wrapped cover the blurb offers. I’ve tried the paper back and it looks good but it just isn’t very durable. They also offer a dust jacket option but I’ve never been tempted to try it.

I placed the crocodile texture first. It was large image but not long enough for this cover so I copied and flipped the image horizontally. Then placed another copy next to that to give me enough image to cover the page horizontally. I copied all three of those and flipped them vertically to finish covering the page. Otherwise I’d risk too low of  resolution and ending up with a poor quality image.

Now I had my texture but not the desired color. So on another layer I made a box large enough to cover the entire cover and filled it with brown. I used Pantone 7519 PC. Then I changed the transparency in the effects pallet to multiply. That made it so the crocodile texture came through. I was getting rather excited at this stage because how much it was looking like my mother’s suitcase.

Next I was ready to place the stickers. This took some trial and error to get a good balance in color and shape. I also kept in mind where I would be putting the text on the front, spine and back. As you can see I used some of the stickers more than once. But since they are on the front and the back I doubt that anyone has noticed on the finished book.

To add just a bit of depth to the stickers the next step was a drop shadow. I’m not sure that you can see it here. Instead of the default 7 pt. drop shadow these are just 1 pt. in offset on both the x and y axis.

The next step was to add the text. The cream color and font (Warnick Pro) are consistent with what I used for the inside of the book. At this point I realized that the cover was too busy. The drop shadow on the text helped make it more readable but it wasn’t enough. So I added a box around the title text on the front and changed the main title to red. I also put a stroke on the box, inspired by several of the stickers. Along with a larger drop shadow.

cover with box around title

This was a big improvement and I thought I was done. But when it came back to it later I decided it was still too busy. How could I fix it? I was not willing to give up on the concept of replicating my mother’s suitcase but I was not happy with all between the stickers and the title both front and back. So I decided to tone down the stickers. I took a black box large enough to fill the cover. I placed it under the text but over the stickers. Then after experimenting the transparencies I figured out that at 36% and using the darken effect I got the stickers toned down so they didn’t compete with the title. Yeah! The design now worked.

Next week I’ll go over how I designed the layout for the inside of the book and using master pages in InDesign. What fun covers have you seen or designed yourself? I’d love to hear about them.